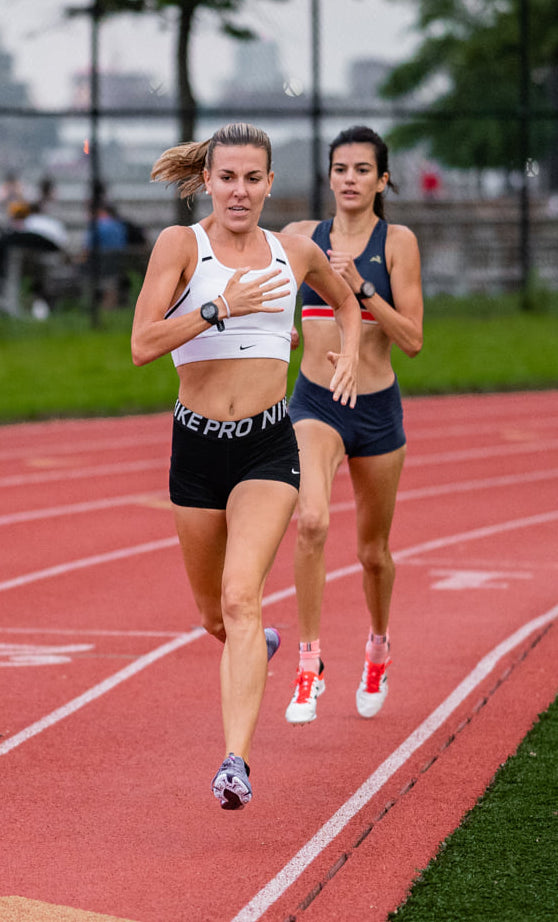 Emmi Aguillard has been a competitive distance runner since she was in the 6th grade. She competed in cross country and track and field as an NCAA D-1 scholarship athlete at Tulane University, where she also served as cross country team captain. She graduated from Columbia University with her Doctorate in Physical Therapy in 2016.

After graduation, she began working at Finish Line Physical Therapy, where she specializes in treating runners and endurance athletes with a focus on prehab, performance, and women's health. She also works with pregnant women and new moms to adjust their training during pregnancy and safely return to running after giving birth. Emmi completed her Fellowship in Applied Functional Science through the Gray Institute in 2017, her advanced training in women's health through Herman and Wallace, and is a RRCA-certified running coach. Emmi currently coaches for the Dashing Whippet Running Team, and has worked as a pacer for Nike+ Run Club in NYC.

Emmi has been competitively racing in Manhattan since she joined the Dashing Whippet Running Team in 2013. She continues to compete in a range of distance races from mile to marathon. She has qualified for and raced the New York City Marathon two times, and the Boston Marathon three times. She also enjoys competing in unsanctioned races around the city. During quarantine, Emmi has been enjoying the virtual racing circuit, competing in a variety of races including bracket style virtual tournaments designed by Trials of Miles, beating her old college times and setting a track PR in the 5k! She also swam competitively in high school and has competed in several triathlons. Emmi loves challenging herself in all types of outdoor adventures, and has backpacked through the Alps and Rockies. In addition to individual events, Emmi enjoys competing in ultra-endurance team races such as the Hood to Coast Relay. She also loves the New Orleans Saints.

Emmi's passion for longevity in the sport drove her to pursue a career in physical therapy specializing in helping endurance athletes achieve peak performance by staying healthy and avoiding injury. Emmi creates group training plans and workouts, but she emphasizes a one-on-one coaching philosophy and believes that a custom training plan tailored specifically to your body and your life is critical to achieving your goals.